This project was principally funded by financial contributions from a variety of industrial and non-profit sponsors. In particular, we would like to acknowledge Chevron, ClearPath, ConocoPhillips, Dow, Environmental Defense Fund, ExxonMobil, Shell, Toyota, and Wal-Mart for their financial support and intellectual contributions to this study. In addition, we would like to thank David Walling of the Texas Advanced Computing Center of UT Austin, Stuart Cohen, Wesley Cole, and Eric Wilson of the National Renewable Energy Laboratory, Chen-Hao Tsai of Midcontinent Independent System Operator, Bart McManus of Bonneville Power Administration, and Colby Johnson of the Western Electricity Coordinating Council  for their technical inputs.  We would also like to thank the Texas Advanced Computing Center and National Renewable Energy Laboratory for the use of computing facilities during the project.

This acknowledgement should not be considered an endorsement of the results by any of the entities that contributed financially or intellectually.

The University of Texas at Austin is committed to transparency and disclosure of all potential conflicts of interest. Each of the contributing authors to this study abides by the disclosure policies of the University of Texas at Austin and has filed their required financial disclosure forms with the university. None of the researchers has reported receiving any research funding that would create a conflict of interest or the appearance of such a conflict.

Dr. Varun Rai’s affiliations are available on his CV here; his Energy Systems Transformation Research Group is funded by U.S. Department of Energy and National Renewable Energy Lab (NREL). Dr. Carey King’s sponsors can be viewed on his website. 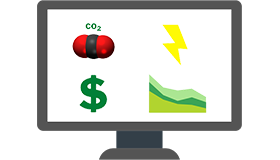