The old, dirty, creaky US electric grid would cost $5 trillion to replace. Where should infrastructure spending go?

By Joshua D. Rhodes, Postdoctoral Fellow at The University of Texas at Austin Energy Institute

This piece was originally published in The Conversation and has also been published by the Associated Press, the Houston Chronicle, the San Antonio Express-News, the San Francisco Gate, the Albany Times-Union, and The Atlantic’s CityLab.

The electric grid is an amazing integrated system of machines spanning an entire continent. The National Academy of Engineering has called it one of the greatest engineering achievements of the 20th century.

But it is also expensive. By my analysis, the current (depreciated) value of the U.S. electric grid, comprising power plants, wires, transformers and poles, is roughly US$1.5 to $2 trillion. To replace it would cost almost $5 trillion.

That means the U.S. electric infrastructure, which already contains trillions of dollars of sunk capital, will soon need significant ongoing investment just to keep things the way they are. A power plant built during the rapid expansion of the power sector in the decades after World War II is now 40 years old or older, long paid off, and likely needs to be replaced. In fact, the American Society of Civil Engineers just gave the entire energy infrastructure a barely passing grade of D+.

The current administration has vowed to invest heavily in infrastructure, which raises a number of questions with regard to the electric system: What should the energy grid of the future look like? How do we achieve a low-carbon energy supply? What will it cost?

Infrastructure seems to be an issue that can gather support from both sides of the aisle. But to make good decisions on spending, we need first to understand the value of the existing grid.

The electric grid is intended to last decades, yet few people realize the entire system must finely balance supply and demand across timescales as brief as a second. Every watt of electric power for lighting homes, operating laptops or running air conditioners is generated at the same time in different locations, mostly by burning fuels that spin magnets in generators. There is essentially no storage of electricity on the grid; instead most energy is stored in fuels – coal, natural gas, nuclear products and water behind dams, waiting for the command to be converted to electricity in real time. 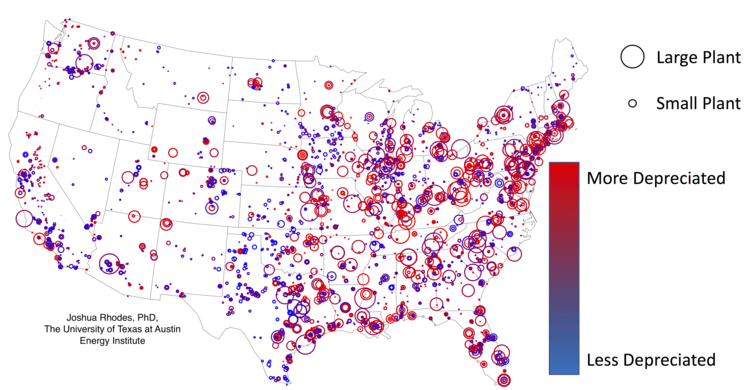 In recent years, where we get our power has changed dramatically. The oldest generators are large power plants, with many located in the eastern part of the U.S. Most recent additions have been smaller and more spread out – think rooftop solar panels or wind farms. Some experts have even said that this model of more distributed generation closer to where power is consumed – along the edge of the network, rather than central power plants – is the new norm.

Going forward, we can either build the grid back the same way we’ve done before or we can invest in new technologies that can bring the same service but at a lower cost.

And how could we make it cleaner? Some people think the grid can run completely on renewable energy sources. Others say the best way to “decarbonize,” or reduce carbon emissions, for the energy system as a whole is widespread electrification of the industrial and transportation sectors.

But to answer what such transitions would cost, we need to know: What does the current grid cost? How much is all the concrete, steel, silicon, etc. that we have already installed in the ground currently worth? To help inform policymakers and planners grappling with their vision of the future, I set about to answer that question.

What makes up the grid?

For this exercise, I’ve limited “the grid” to the following parts:

This calculation leaves out additional and necessary components of the grid, such as the electric wire inside your home, meters at the electrical panels on homes and buildings and end-use devices that consume the electricity.

Combing through a variety of public reports and using updated estimates for new construction and standard approaches for estimating depreciation, we quantified the value of the nation’s assets for power generation, transmission and distribution.

The total capacity of these power plants is about 1.15 terawatts. That’s the generating capacity of about 1,000 nuclear power reactors (the U.S. currently has about 100). As you can imagine, that would be costly to replace. For power plants alone, the replacement value is nearly $2.7 trillion, and the depreciated value, or the rough current value, is nearly $1 trillion. Overall, the breakdown of the value is about 56 percent power plant, 9 percent transmission system and 35 percent distribution system. 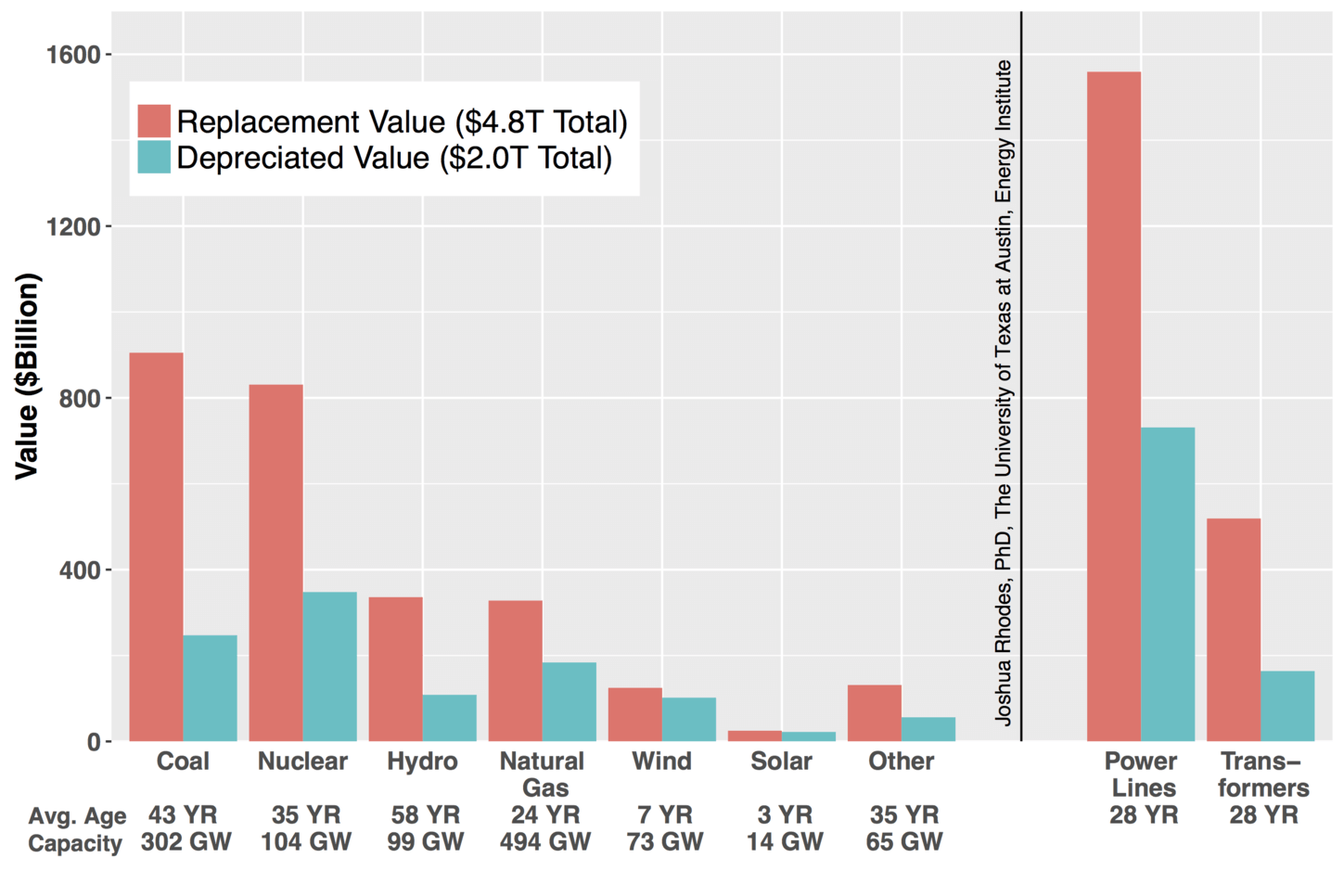 Breakdown of the replacement and depreciated value of U.S. electric infrastructure. Many of the underlying data sources, including from the EIA, are the same as those recently utilized in the UT-Austin Energy Institute’s Full Cost of Electricity study. We used a simplified straight-line depreciation schedule that ends in a scrap value of 15 percent of the initial cost at the end of its expected lifetime. Joshua Rhodes

If we want to have a cleaner energy future, there are multiple pathways to get there. However, I hypothesize that the cheapest and likeliest pathway will be the one that best leverages, not duplicates, the infrastructure we already have. One of the most “plug and play” pathways (and what we are seeing today) is a conversion from coal to gas-fired generation at power plants that can use existing wires, poles and water infrastructure.

At the other end of the spectrum, a hydrogen economy would require massive new investments in new kinds of technology, so it would leverage less of what we currently have. For instance, we’d need to build places to generate and store hydrogen. On the other hand, it has the potential to be more resilient and sustainable. 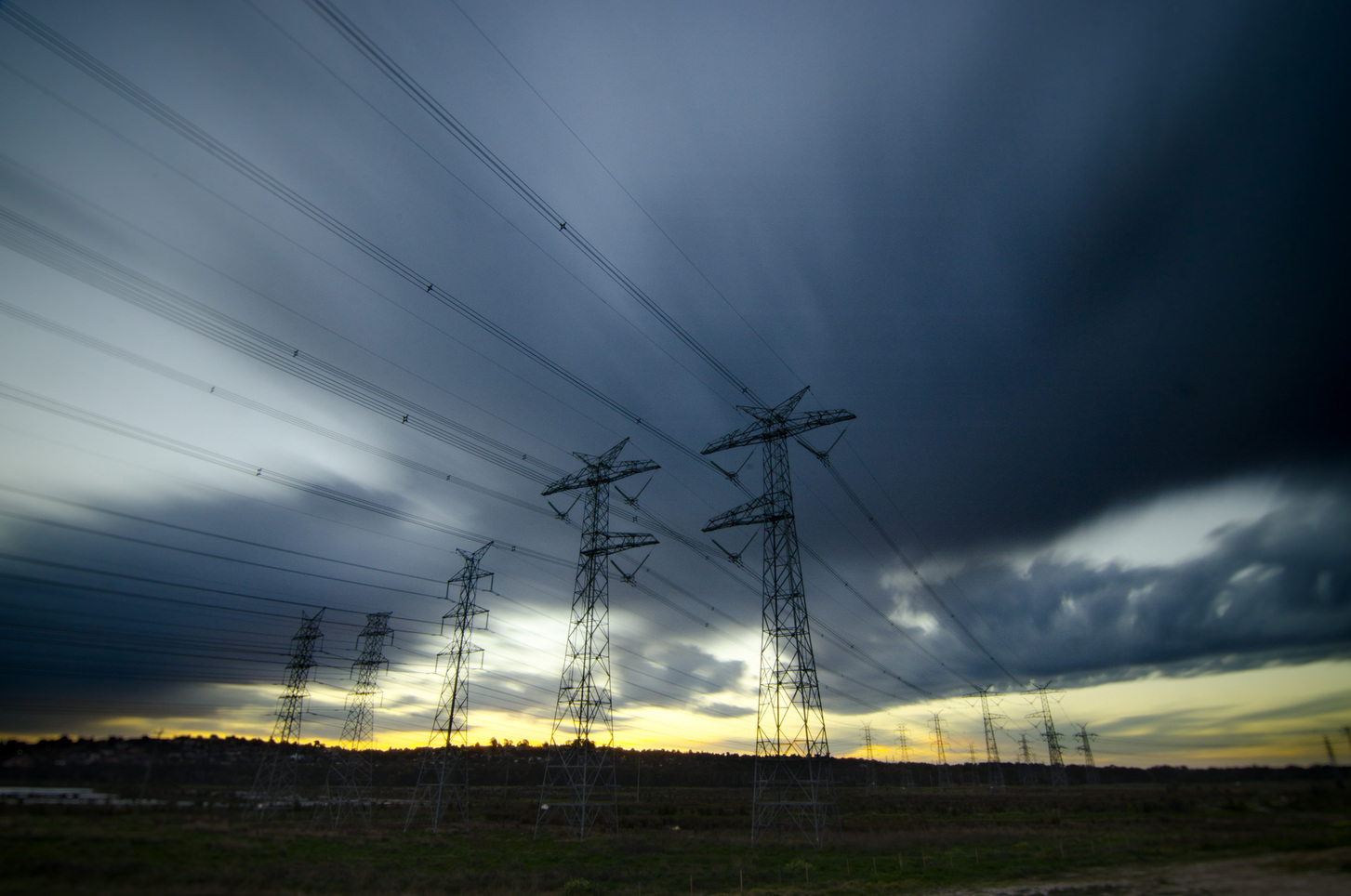 Showing their age: Upgrading transmission lines could bring solar and wind-generated power from remote parts of the country to where the people are, which would help make the grid cleaner and potentially lower prices. indigoskies/flickr, CC BY-NC-ND

One area that does look promising for infrastructure investment is upgrading the bulk power transmission network. These upgrades could allow power to flow between regions of the U.S. and would be similar to how the interstate highway system drove down business costs across the country by greatly reducing the time it took to transport goods and services across our vast country.

There are areas of the U.S. where power is produced cheaper and with fewer environmental impacts than in other areas. Expanding transmission lines to areas of the country that have good wind and solar resources can bring very low-cost power to users. The problem is that these areas are not always where the people are, so to bring this power to the people, we need a strong transmission network.

Distribution networks – the part of the grid that delivers power directly to buildings – can also integrate more solar without much added cost to the grid’s operation. But once solar capacity reaches a certain percentage of power demand on the local network, which varies by location, then more costs are incurred.

In the end, consumers, or taxpayers, always end up paying for these upgrade projects, but the benefits can outweigh costs. Texas’ expansion of its electric grid has allowed for much more wind power to reach load centers which, along with a drop in natural gas prices, has driven down the wholesale electricity market costs. Those lower costs are then passed along to ratepayers.

There is no path that does not require investment – even just maintaining what we have will cost hundreds of billions, if not trillions, of dollars over the next decade. The bigger question is: As we continue to replace and rebuild this amazing grid, what technologies should we focus on?