Republicans have agreed to put a price on carbon, at least temporarily.

The Furthering carbon capture, Utilization, Technology, Underground storage, and Reduced Emissions (FUTURE) Act, part of the recently enacted Bipartisan Budget Act of 2018, extended and expanded the 2008 tax credits for capturing CO2. The credits can be used for either sequestering the CO2 in geological formations, or selling it for enhanced oil recovery (EOR). If a firm decides to sequester the CO2, they receive a $50/metric ton (MT) credit and a $35/MT credit if they sell it for EOR.

For a power plant or chemical facility to claim these credits, they must remove 500,000 MT of CO2 that otherwise would have been released into the atmosphere. For firms looking to either pull CO2 directly from the air, or make a product with that CO2, the total CO2 threshold is lower and the credit can be higher. To be eligible, projects must start construction within the next seven years; there is a 12-year window to claim the credits, but no limit to the amount of CO2 credits that can claimed.

The 45Q tax credits for CO2 act like the production tax credit (PTC) for wind, but instead provide a credit for the capturing and handling of the energy byproduct, not the energy itself. Nonetheless, the credit will have the same effect on natural gas and coal power plants as the PTC has for wind, and might make new some new gas and coal plants economic.

While the environmental community has long sought a price on carbon, it seems conflicted about this tax credit. Meanwhile, industry is cautiously optimistic about the policy.

How might this new credit affect the power sector?

Carbon capture and sequestration (CCS) has had a rough start. There are about 17 CCS projects in the world, two of which are in North America. The technology has received lackluster support and some high-profile project cost overruns, including Southern Company’s failed Kemper power plant, have dampened enthusiasm. That said, the Petra Nova CCS facility in Houston is in operation and utilizing the captured CO2 for EOR.

Depending on how things play out, the new tax credit could be a significant game changer to incentivize additional deployment of CCS technology.

One metric used to determine if it makes economic sense to build a new power plant is the levelized cost of electricity, or LCOE. Long story short, LCOE is the sum total of money that it takes to build, finance, and operate a power plant divided by the total amount of electricity it is expected to produce over its lifetime – essentially distilling the value of a power plant down to a single number. While this metric is far from perfect, it is commonly used to compare different technologies and can be thought of simply as the average price that a power plant must receive for its output in order to break even.

There are two basic ways that we directly subsidize power plants in the U.S. – tax credits on capital costs or tax credits on energy production. Solar PV projects are usually supported by the Investment Tax Credit (ITC), which lowers a project’s capital costs by about 30%, while wind projects usually receive the Production Tax Credit (PTC), which pays about $22/MWh for energy generated. These tax credits have been instrumental in getting the wind and solar industries off the ground and have resulted in the top two fastest growing jobs in the U.S.

Since wind has negligible operating costs, the PTC pushes its marginal costs down to about minus $22/MWh, or the value of the credit. For this reason, wind is able to bid negative prices into the market, which assures it always sends electricity to the grid, as long as grid conditions are conducive. 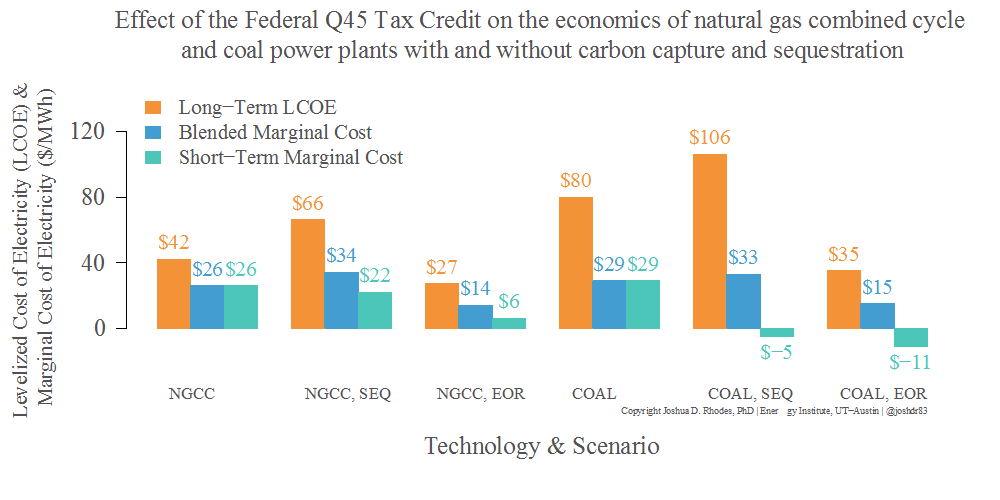 Figure 1: Figure showing the effect of the 45Q tax credits on new natural gas combined cycle (NGCC) and coal power plants on their long-term LCOE and their short and long-term marginal cost to generate power. Scenarios include sequestering the carbon underground (SEQ, cost: $7/MT) and selling the carbon for enhanced oil recovery (EOR, price received: $15/MT). For capital cost, heat rate, O&M and other costs assumptions, see here. Blended marginal cost means the average marginal cost for a power plant taking into account that it will not receive the carbon credit for its entire lifetime.

The LCOE of a new natural gas combined cycle power plant is about $42/MWh, and about $80/MWh for a new coal plant (assuming a 50% capacity factor), but their marginal costs to generate are roughly $26 and $29/MWh, respectively. Given that wholesale electricity prices in the U.S. are in the mid 20s to mid 30s, it is not surprising that we are not building any coal. Indeed, even some new natural gas power plants are having trouble competing.

It is possible that the 45Q credits could reverse this trend.

Coal produces so much CO2 per MWh generated that if it is able to either sell 90% of it for EOR or sequester it underground, coal plant owners might be able to bid negative into wholesale markets for the first 12 years of CCS operation. This could represent a paradigm shift for new coal plants (and any that are able to retrofit to capture carbon), which could in turn trigger a construction boom. Having a negative marginal cost would usher coal+CCS plants to the front of the bid stack and could vastly increase the amount of time that they operate.

If a coal plant were able to sell its CO2 for EOR at an average cost of at least $15/MT over its lifetime (+ 12 years of the upfront $35/MT credit), its marginal cost could be low enough to allow the plant to operate at a very high capacity factor. This high capacity factor could lower the average price that a coal+CCS plant would need to receive in order to service its capital, possibly making new coal+CCS plant construction an attractive investment. If fully realized, the tax credits could put a new coal+CCS plant on equal footing with a regular natural gas combined cycle power plant today. Sequestering the CO2 could be profitable in the short-term because of the $50/MT credit, but might not be profitable in the long-term because it has to pay to sequester the CO2 and continue to service a higher capital cost.

The effect on natural gas plants would be similar. A NGCC+CCS plant that is able to sell CO2 at an average of at least $15/MT (possibly lower) over its lifetime could have a lower long-term cost than a conventional non-CCS NGCC plant. Again, a higher CO2 price received makes the economics better.

A 90% CCS rate would reduce CO2 emissions at a new NGCC plant from 341 to 40g-CO2/kWh and from 937 to 114g-CO2/kWh at a new coal plant. Nationwide, the current grid mix is about 980g-CO2/kWh. These numbers only consider combustion CO2, not any upstream and downstream activities. All calculations that derived these results can be found here.

For all intents and purposes, the 45Q credit acts as a carbon tax, but what makes it different is that it does not provide an incentive to generate less CO2, as a “traditional” carbon tax would. On the other hand, the credits are only available for a limited amount of time and, if the technology can be made to work, could significantly reduce the carbon intensity of our electricity generation, which might serve as a hedge against any future traditional carbon tax.

Joshua D. Rhodes, Ph.D., is a research fellow at The University of Texas at Austin Energy Institute.