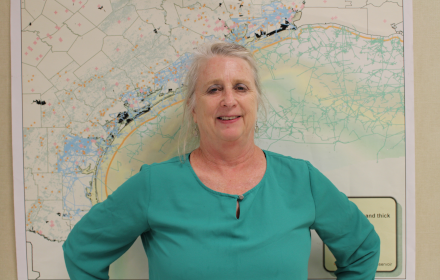 Sue Hovorka’s first brush with geology came as a small child when she and her sister plucked brachiopod and crinoid fragments from the gravel driveway outside her Ohio home. Her budding passion for science grew while hunting for fossils during family outings in Clifty Falls State Park.

By the time a Girl Scout Leader took her 6th grade troop on a camping trip along the northern banks of Lake Huron, where Hovorka encountered the igneous rocks of the Canadian Shield, the ancient geological core of the North American continent, she was hooked.

Hovorka, who was born in New Orleans and grew up in the Midwest, went on to study geology at Earlham College, a small liberal arts school in eastern Indiana, before coming to UT Austin in 1975.

She quickly found her niche at the university, renowned for its scientific rigor in geosciences. While studying for a masters’ degree in geology Hovorka began working at the Bureau of Economic Geology in the Jackson School of Geosciences.

Hovorka went on to earn her PhD, also in geology, and she’s been here ever since.

“I really like the work environment here,” she says. “It’s a place where you can write (research) proposals on whatever topic excites you, and do sponsored research.”

Hovorka’s lifelong zeal for science has made her a leading expert in research involving the geologic injection of CO₂ produced from the combustion of fossil fuels in electricity generation.

As a Senior Research Scientist at the Bureau’s Gulf Coast Carbon Center (GCCC), an industry/academic partnership, Hovorka and her team study the “S” in Carbon Capture and Sequestration (CCS).

Over the years, she has worked on a variety of topics, including water quality protection, waste storage in bedded salt, and reservoir characterization.

Much of Hovorka’s early work focused on the transmissivity of formations – their ability to accept fluid – and the pressure under which CO₂ can be injected, typically into sandstone or limestone, without threatening groundwater or creating other environmental problems. Since the late 1990s, however, the focus of her research has been on assessing the effectiveness of subsurface geologic sequestration of CO₂.

The team of researchers Hovorka oversees typically includes up to half a dozen graduate students.

“I love mentoring the students we have as incipient professionals; they’re great; they’re fabulous,” she says with an infectious chortle.

Hovorka sees her sweet spot in the transition between academic research and applied research, which she characterizes as tackling “a fresh idea, a new idea, with as much academic prowess as we can put into it … within an applied frame that solves a significant problem.”

She says she was initially skeptical about the feasibility of storing large volumes of CO₂ underground in subsurface formations.

Following a series of successful research projects, however, Hovorka sees CCS as anything but an unproven technology. Indeed, she views it as a vital means for de-carbonizing energy – particularly if society continues to rely on fossil fuels for at least a portion of its electricity generation, as Hovorka believes will be case for the foreseeable future.

She sums up her work by calling on an age-old reprimand to kindergartners: ‘Put it back!’ – meaning, if you take carbon out of the earth in the form of fossil fuels, put it back in the form of CO₂ after you have extracted the energy.

Hovorka’s response to those who claim CCS is not ready for prime-time?

What’s more, research has shown CCS can be done on a grand scale, and is commercially viable.

The problem, she says, is an unwillingness to include the price of CCS in the “full-cycle cost” of carbon.

“We just don’t accept the reason to buy it. We as consumers are not demanding de-carbonized fuel.”

Several years ago, Hovorka’s team completed a two-phase project in East Texas called the Frio Pilot, now recognized as the first US field test of storage of CO₂ in brine-filled sandstones.  She also led a team of researchers in the early test of the Southeast Regional Carbon Sequestration Partnership (SECARB), which monitored injection of 5 million tons of CO₂ at Denbury’s Cranfield Field.

Both of these projects have recently been recognized by the international Carbon Sequestration Leadership Forum.

All told, GCCC scientists have conducted seven major field research projects in their quest to develop cost-effective technologies for storing CO₂ in the subsurface. To showcase its work, the GCCC recently hosted an International Workshop on Offshore Geologic CO₂ Storage at its north Austin facility on the Pickle Research Center campus, at which scientists from more than a dozen countries reviewed recent research findings and discussed forming a global community to pursue offshore CO₂ storage.

Go here to learn more about the GCCC’s research into carbon sequestration technologies.

This fall, Hovorka’s team will undertake another major field project near the Continental Shelf along the Texas Gulf Coast, where they will examine existing states of stress in the earth’s crust to determine the degree to which such stresses will affect the injection of carbon offshore.

Hovorka also is active in facilitating dialogue between scientists and the broader public, with a focus on pre-college students and teachers, as part of the Bureau’s STORE education program.

When not studying rocks in the field or in the lab, Hovorka spends her time – where else? – outdoors, close to the earth, hiking with her dog.

“I’m an unrepentant hiker,” she muses, “I’m a total Bull Creek addict, and anywhere else on the planet I can get.”