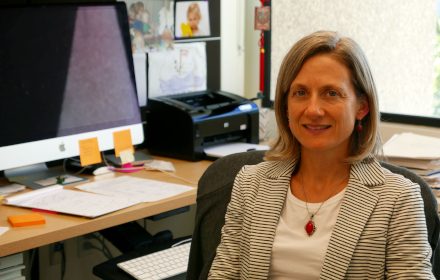 For some people, the pursuit of one’s calling culminates in a singularly creative phase; when hard work and good fortune unite, giving rise to a voice that expresses itself in varying ways through the years.

Such is the case for UT Austin Prof. Sheila Olmstead, an environmental economist in the LBJ School of Public Affairs, who has followed a transcendent path that was paved during an especially fruitful period just before she returned to UT Austin in 2013.

Olmstead, who teaches masters courses in Microeconomics and Environmental and Resource Economics, received her Masters’ in Public Affairs from the LBJ School in 1996. She went on to earn a PhD from Harvard University’s John F. Kennedy School of Government in 2002 before becoming a professor in Yale University’s School of Forestry and Environmental Studies, where she was the recipient of three teaching awards.

But it was during a formative three years at Resources for the Future (RFF), a non-partisan think tank that conducts economic research on natural resources and the environment, where Olmstead’s interests coalesced into integrated themes that continue to distinguish her work.

“I feel very lucky,” she says, noting that she was on sabbatical during her first year at RFF, a period that gave her time to “push forward on new research projects that I wanted to work on – and I’m still reaping the benefits of that.”

During the 13 years since her PhD, Olmstead has compiled a body of research on the economics of water resource management, publishing numerous scholarly papers on water demand estimation, water conservation policy, and access to drinking water among low-income communities.

Her time at RFF also led to her work on unconventional oil and gas development, “and it’s still bearing fruit, so that’s really fun,” she notes.

Olmstead didn’t plan on a career in environmental economics. In fact, as an undergraduate at the University of Virginia she studied political theory, concentrating on international affairs. Then, following a two-year stint at a non-profit organization in Washington, D.C. where she conducted research on U.S. foreign assistance programs, Olmstead came to UT Austin to work on her Masters’ degree, thinking she would continue her studies in foreign affairs.

After her first year at UT, however, Olmstead interned at a state environmental regulatory agency, where she worked on projects involving water and wastewater projects in the colonias, unincorporated communities along Texas’ border with Mexico that lack potable water, sanitary sewage systems, and other basic infrastructure.

As it happens, this serendipitous turn of events signaled a change in the course of her studies and, ultimately, the nature of her research.

“I ended up gearing my second year here at the LBJ School toward environmental policy,” she recalls, adding that she shifted the focus of her thesis to economic and environmental issues in the colonias. She has published several articles on rate regulation and pricing of water services along the border and in other poor communities.

Olmstead continued her research into the economics of environmental issues at Harvard, where she earned her PhD in 2002, and during her eight years at Yale.

It was at RFF where the orbit of Olmstead’s research expanded to include energy issues. During her first year, she received funding from the Sloan Foundation to examine water-related externalities associated with shale gas development, which had just begun to take off in the nearby Marcellus formation.

Her time at RFF led to several other research projects, some completed, some ongoing, relating to water quality impacts in energy production. For example, in 2013, Olmstead published an article on the impacts of shale gas development on surface water quality in Pennsylvania; this November, she and a former RFF colleague will publish another article on the economics of shale gas development in the Annual Review of Resource Economics.

Yet another project, which began while she was still at RFF but is still in progress, examines the impacts of shale gas development on agriculture. The paper explores the ways in which sources of income on farms and ranches in six Western states have evolved because of oil and gas production.

Over time, Olmstead further expanded her research to include adaptation to climate change and market-based solutions to environmental issues. A 2012 paper examined advancements in the architecture of international climate change policy, and she is working on another project that explores the economic impact of drought on a global scale.

Olmstead was born in Lansing, Michigan and lived in Chicago and Brussels, Belgium before attending middle and high school in south Florida. Her academic career has kept her on the move, up and down the east coast, to Texas and the nation’s capital, and back again to the Lone Star State.

She says she feels very fortunate to have had so many great jobs, all of which were “a great fit, but very different.”

At RFF, where she remains a Visiting Fellow, she worked “in a building full of environmental economists” that spurred a fruitful environment for thinking through ideas, writing papers, and making progress on research projects. UT Austin, in contrast, offers “an enormous number of great physical scientists and natural scientists working on issues of interest to me, which is productive in a different way.”

“UT is the energy university, and that’s great for me and great for my work,” she says, adding with a laugh that she would like to see “more social scientists working broadly on energy issues – and I think my physical scientist colleagues would say the same thing.”

For the past two years, Olmstead and her family have summered in Bozeman, Montana, where she has a fellowship at the Property and Environment Research Center, a research institution that focuses on market-based solutions to environmental problems. The break from the demands of teaching and service allows her to spend time focusing on her research and hiking with her family.

“I feel lucky,” she says again.

Go here for a complete list of Prof. Olmstead’s publications and other writings.