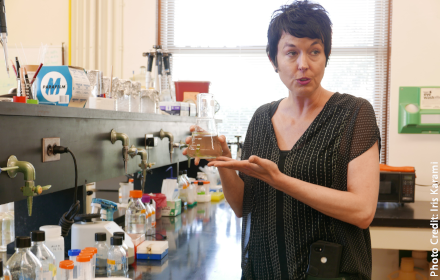 Dr. Schonna Manning studies the biology of algae. As Director of R&D of the UTEX Culture Collection of Algae Manning oversees a team of researchers that collects, methodically maintains and analyzes microalgae for the production of a wide array of natural products and materials.

Manning’s formal title is Research Assistant Professor in UT’s Department of Molecular Biosciences, but she calls herself an “interdisciplinary phycologist, molecular biologist and natural products chemist.”

Call her The Algae Queen for short.

“I’m all about algae, all the time,” she laughs from her third-floor office in the Biological Laboratories building on the UT campus.

Her team of researchers stays busy with a robust catalog of projects, including:

The UTEX Culture Collection is the largest repository of living algae strains in the world. Under Manning’s direction, UT sells samples to other academic institutions, government agencies and commercial interests under a fee-for-service arrangement. (The services are provided free of charge to researchers within the UT community.)

“We are the go-to collection for anyone doing algal research,” she says.

The UTEX Collection sells samples that are “in culture” – meaning the algae are stored in fresh or salt water, provided by light and fresh supplies of nutrients to keep them alive and growing. Touring labs holding the many racks and trays of bottles and beakers, Manning gestures to the samples as if they were her children.

Her team – which includes a handful of post-docs, a master’s student and a half dozen undergraduates, along with the occasional research scientist on loan from another university – runs a tight ship; even the smallest amount of bacteria or other contaminant can ruin the entire culture.

Some of the collection’s older samples, more than 100 years old, are preserved in the collection’s cryogenic program, and are submerged in liquid nitrogen tanks to maintain a temperature of -190C.

The collection provides an unparalleled resource for basic research and applications of microalgae in biotechnology, Manning says.

Research in the area has “barely exposed the tip of the iceberg” she adds, leaving immense opportunities for the discovery of novel bioactive compounds. 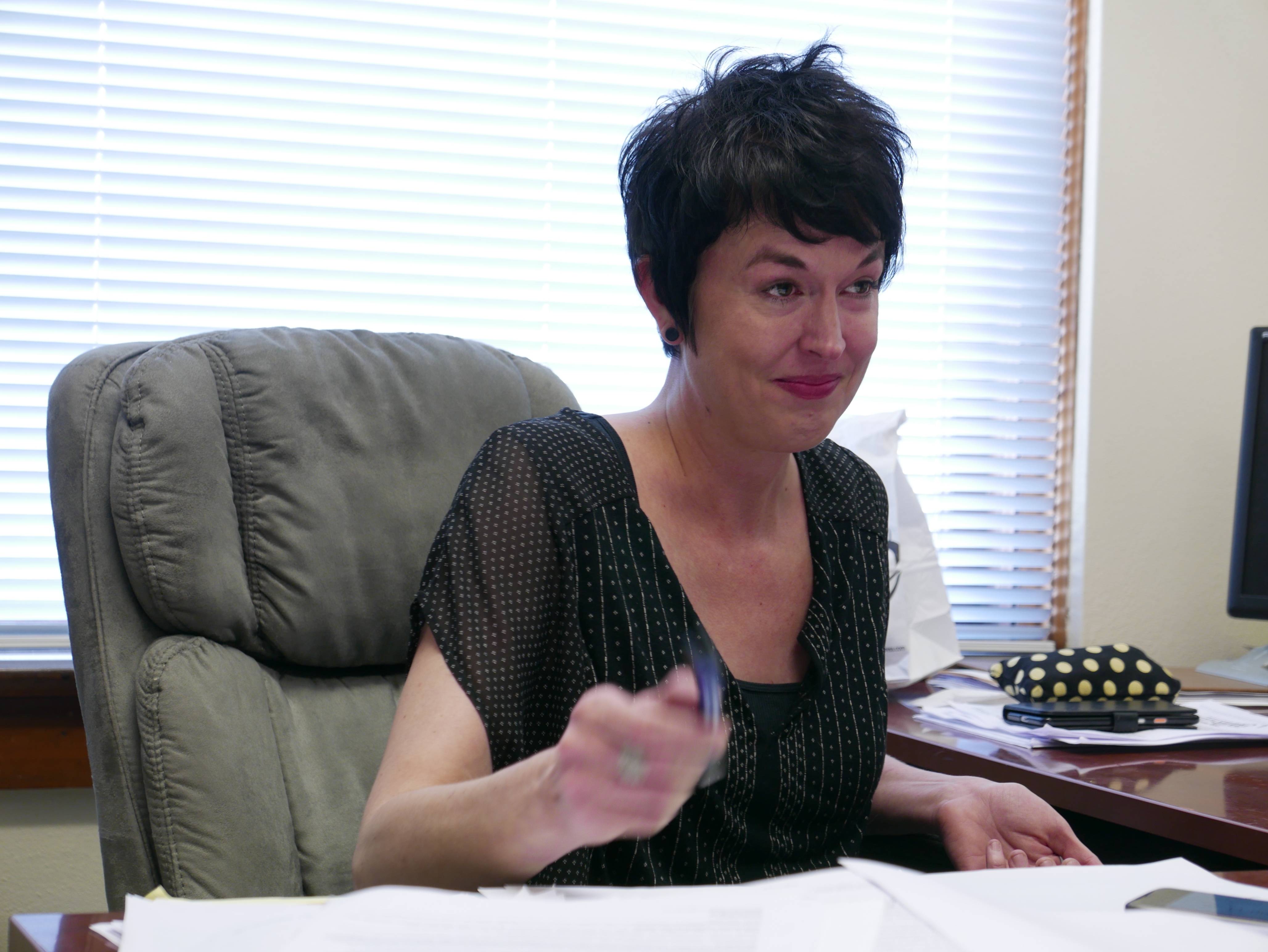 “It’s an untapped resource,” Manning avows, noting that as the largest living assemblage of microalgae in the world, UT’s collection represents “more genetic and biochemical diversity than all the zoos and botanical gardens worldwide, combined.”

Though Manning doesn’t teach classes in the usual sense, she spreads the word about the wonders of phycology in a series of workshops funded by the Department of Energy. The sessions, attended by graduate students, entrepreneurs and others are a crash course on all things algae, cramming a semester’s worth of content into five 12-hour days.

While an enormous source of oil is stored in algae, extracting that embedded energy does not make sense economically, Manning notes.

“All liquid fuels are broadly believed to have come from ancient algae deposits” that have undergone hundreds of millions years of hydrothermal pressure and heating, she observes.

That said, “algae for fuels is not the magic bullet” to solving the planet’s quest for a limitless supply of clean, affordable energy.

“In my mind, algae are too expensive to burn.”

“What is the difference between toxin and medicine?” she poses rhetorically. “Dosage and delivery!”

Researchers examine molecular mechanisms and, using their knowledge of synthetic biology, rearrange them to make a host of new molecules that resemble an antibiotic or chemotherapy agent, for example.

“We’re looking at developing the next set of modern medicines,” Manning says with pride.

Today, much of that work involves extracting and analyzing microalgal compounds for their potential applications in cosmetics and therapeutics, nutritional supplements and pharmaceuticals, feedstocks for farm animals, and other products.

Many of these natural products are expensive and in high demand, she says, adding that the list of high-value items has virtually limitless potential, in part because researchers use every part of the alga.

“We can find utility for almost every component,” she says. “For me, that’s the future of algae – natural products chemistry.”

“Algae own the carbon cycle; they are the original carbon dioxide sponges,” Manning observes, noting that between 50 percent and 80 of the oxygen in Earth’s atmosphere comes from algae.

“None of us would be here without algae.”
Working with material that has formed “the foundation of life as we know it” makes algae easy to work on, and tout its importance, Manning adds, “but we have to sell it.” 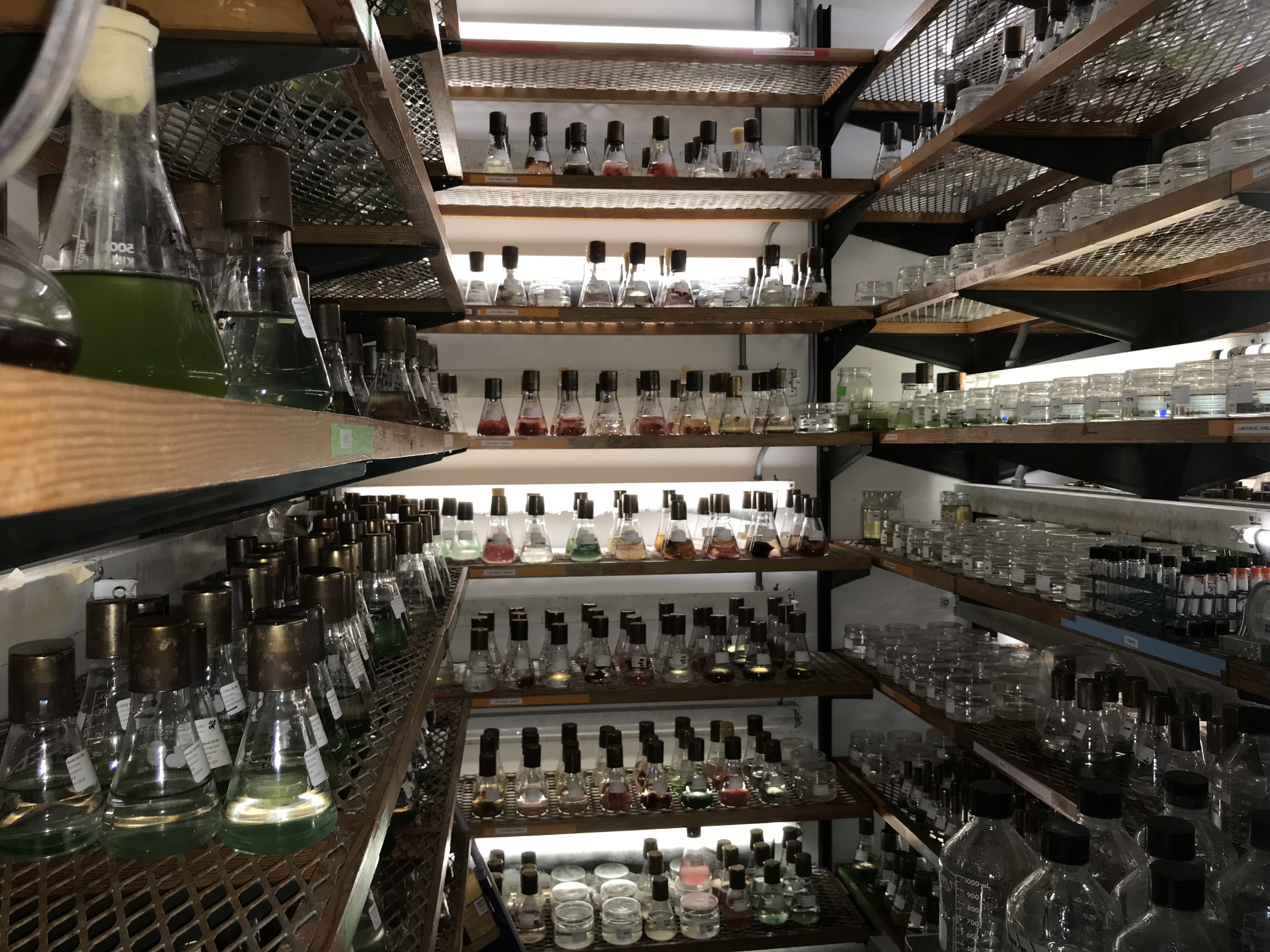 Some of the more than 3,000 samples in the UTEX Culture Collection of Algae. (Photo Credit: Iris Karami)

Although technically not a native Texan – she reluctantly confesses she was born in Oklahoma – Manning moved to the Texas Panhandle when six months old, and has never strayed far from home.

Though she excelled in math and science, her first love was the arts. A classically trained violist, Manning also has love for ceramics and origami. She attended public schools in Amarillo, graduating with honors at age 16 from Tascosa High School.

A burgeoning interest in ecological issues – ignited by a concern over the effects of global warming on Australia’s Great Barrier Reef – was a turning point in her choice of academic pursuits.

“I used my knowledge of ceramics to start thinking about ceramic engineering to develop substrates off the coast for corals to establish, as well as to eliminate erosion along the coastline,” she recalls.

Her interest in coral reefs soon formed “a foundation to how I could contribute to the world’s ecological problems.”

When it came time for college, Manning discovered that the only university offering a degree in ceramic engineering was in Alfred, New York – “above the snow line”– whose harsh winters helped steer her to UT.

Manning came to Austin in the fall of 2000 and, maintaining her fast-track academic pace, earned a B.S. in Biology, with a minor in Ecology, Evolution & Behavior, in just three years.

It was then that her passion for algae truly blossomed.

Manning immediately started work on a master’s degree, barely slowing down before continuing her studies in pursuit of a Ph.D., which she earned in 2010.

When not in her lab or marketing the marvels of algae to potential donors, Manning spends time with her husband and their animals – at present two cats and two dogs – and frequently volunteers as foster pet parents. A family ritual is watching corny sci-fi movies.

“As far as me getting away, that’s about it – hanging out with my fur family,” she says.

Manning’s love for the arts is alive and well, too – she still picks up the viola now and then, noting that “the difference between a lawnmower and a viola is that you can tune a lawnmower.”