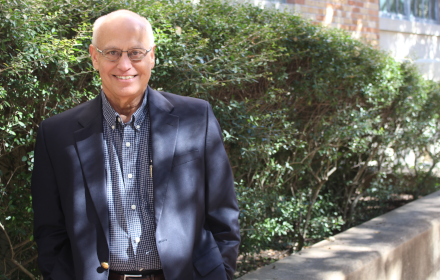 As interim director of the Center for International Energy and Environmental Policy in the Jackson School of Geosciences and director of its Latin America and Caribbean Energy Program, Jorge Piñon regularly meets with energy industry, academics, and government officials throughout Latin America to nurture collaborative academic and research opportunities within the region. That’s his formal job description. But Piñon, a gregarious sort who often punctuates amusing anecdotes with a mischievous grin, sees himself in another light – as an ambassador whose unofficial, unauthorized role is to build the kind of internal collaborative alliances he sees as necessary to make the most of the university’s vast knowledge and expertise.

The challenge, Piñon contends, is to fine-tune an academic model that sometimes lacks the incentives and focus needed to provide faculty and other researchers “a shared common goal” for presenting a unified brand of the university as a whole.

Having spent most of his adult life working in an industry known for its pragmatism and cutthroat pursuit of the bottom line, Piñon firmly believes UT is on the road to emulate the cooperative culture he witnessed firsthand in the corporate world as it establishes meaningful and lasting relationships in Latin America.

During the 1990s, he had the good fortune to arrive at Amoco Oil at a time when the company was undergoing a transformative change in its corporate culture. To better capitalize on its corporate brand, the company reorganized, creating four worldwide regional presidents. Piñon was one of the four – responsible for supporting the corporate umbrella strategy of the company’s operations in Latin America.

He quickly found himself immersed in a culture of teamwork that created incentives, financial and otherwise, for its employees to work together to achieve corporate-wide goals.

What he is trying to foster at UT, Piñon says, is a coordinated ‘strategic roadmap’ that begins with a commitment from university leaders, including deans representing schools and colleges involved in energy research and education. While that sort of top-down support is crucial, he says, equally important is the need for faculty and researchers to build personal relationships with their peers in Mexico and other Latin American countries.

Piñon is encouraged by a new program initiated by UT President Gregory Fenves, who has acknowledged the need to “cross the boundaries of existing knowledge and … take an interdisciplinary approach to address them.”

“Breakthroughs happen when we tear down silos of knowledge,” Fenves noted when announcing ‘Bridging Barriers,’ an interdisciplinary initiative aimed at boosting collaborative efforts among faculty and researchers to “tackle some of the hardest questions in the natural and human-made worlds and the world of ideas.”

Mexico’s widely publicized energy policy reforms, which now permit foreign investment in its oil and gas industry and wholesale electricity market, have received the most attention, Piñon notes, but other nations in the region, including Argentina, Guyana, Uruguay and Brazil among others also are ripe for change.

“These countries are positioning themselves to capitalize on new technologies that could unlock new conventional and unconventional hydrocarbon resources,” he says, but they are in dire need for assistance to keep the process moving in the right direction.

“UT has the expertise to support these countries in understanding and addressing issues that could impact the sustainable development of these resources, which would raise the living standards of their populations” Piñon says.

For example, the McCombs School of Business, School of Law and LBJ School of Public Affairs could help develop sound governance policies and design investment models that emphasize transparency and ethical business practices. Likewise, the Cockrell School of Engineering and Jackson School of Geosciences could offer STEM academic programs and technical research expertise to identify solutions to their sustainable energy challenges, Piñon says.

“Universities can act as impartial thought leaders and agents of positive change in many of these countries that are undergoing significant transitions,” he notes. “We have a very important role to play, and it is not only in Mexico.”

A native of Cuba, Piñon came to the U.S. as a 12-year-old boy along with roughly 14,000 other unaccompanied children who fled Cuba in the aftermath of Fidel Castro’s 1959 Communist revolution in an exodus known as “Operation Peter Pan.”

It was a formative experience that helps explain Piñon’s indomitable spirit, his impassioned soliloquies, and zeal for his work.

Piñon lived in a foster home in New Jersey for two years before his parents finally joined him. The family moved to central Florida, where he graduated from high school in 1965. He married young and had a child before entering the University of Florida in Gainesville to study economics and Latin American studies.

He happily recalls of his days in Gainesville, where he was so poor he gladly accepted fresh liver from fellow graduate students working in the school’s veterinary school.

“Once a week the whole building had liver and onions,” he says. “It was fantastic.”

After graduating with a degree in International Economics, Piñon began work on his MBA, when a recruiter with Shell Oil contacted him one night after supper and asked him to meet for a beer.

“Those were the days of cut-offs, flip-flops, and long hair,” Piñon recalls. “It was great.”

Two weeks later, he received an offer letter in the mail, and his long career in the energy industry began, initially as a supply coordinator for inbound crude oil in Shell’s New Orleans refinery.

Shell promoted him and sent to him Houston, where he lived for three years before he was recruited again, this time by the North American Petroleum Company. Once more, Piñon was on the move, this time to Abilene, Texas.

A few years later, he was back in Houston, as the vice president of supply for Transworld Oil. After the company bought the East Coast assets of ARCO, Piñon moved his family again, this time to Philadelphia, where they lived for two years.

“Our house backed into Valley Forge National Park,” he recalls. “It was beautiful; we loved it.”

Eventually, Piñon was promoted to president and CEO, and he was back in Houston once again. After Amoco Oil hired him away in 1991 as its president of corporate development for Latin America, he represented the business development and joint venture efforts between Amoco Corporation and state oil companies in Latin America.

Eventually, Piñon moved to Mexico City where he lived for five years as Amoco’s country manager, and was responsible for implementing the company’s corporate umbrella strategy in Latin America.  Following Amoco’s merger with BP, Piñon was transferred to Madrid, Spain.

After all his travels, Piñon still recalls fondly his days in corporate America, the lessons he learned there about mutual cooperation, and his current role at UT Austin.