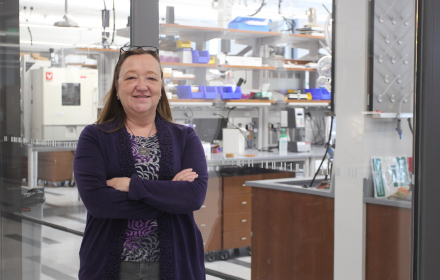 UT Austin Prof. Joan Brennecke knew at an early age that she wanted to be an engineer, the chosen profession of her father and two uncles.

Her dad, who had a long career with Alcoa, “was just incredibly curious about everything,” she says. “There was a strong influence that being an engineer was a good thing.”

Today, as a professor in UT’s McKetta Department of Chemical Engineering, Brennecke continues the research that has been the hallmark of an academic career spanning nearly 30 years: the development of ionic liquids – organic liquid-state salts used in chemical processing and energy storage applications.

Brennecke’s groundbreaking research into ionic liquids is the result of a random encounter with a firebrand lecturer she met at a conference nearly 20 years ago, an experience that changed the trajectory of her life’s work and paved the way for scientific renown.

Brennecke joined the UT Austin faculty in the fall of 2017, one of 10 researchers recruited under the Governor’s University Research Initiative (GURI) grant program, which aims to spur innovation and drive economic activity through scientific research.

Coming back to Austin is a homecoming of sorts for Brennecke, who grew up along the Gulf Coast and received her bachelor’s degree in chemical engineering from UT in 1984.

Her father’s job with Alcoa took the family to St. Louis, Pittsburgh, and Kingston, Jamaica before returning to her hometown, Victoria, Texas. Unsurprisingly, she excelled in math and science, and was valedictorian at St. Joseph High School.

“It was a little school,” she says modestly from her office on the third floor of the new Engineering Education and Research Center building. “I was a nerd.”

During her senior year of high school, the HR director at the local DuPont plant saw her name in the local newspaper and contacted Brennecke about participating in a co-op program that DuPont sponsored for UT Austin students. Over the next three years, she alternated semesters at UT with work at several DuPont research facilities, including the company’s headquarters in Delaware.

“It was great,” she recollects, noting that the experience inspired her to earn her Ph.D. in engineering. “It had a big influence on steering my career.”

After graduating from UT, Brennecke earned her M.S. and Ph.D. in Chemical Engineering from the University of Illinois at Urbana-Champaign, where her thesis focused on supercritical fluids.

“I had a great research advisor, who gave me a lot of independence and encouragement,” she recalls of her graduate work at Illinois. “It was a great confidence-building experience.”

She accepted a position at the University of Notre Dame, where she continued her research into how dissolved solutes in supercritical fluids could influence reaction rates.

“That’s what I did for about my first 10 years at Notre Dame,” she notes.

While attending a conference in Santa Fe, Brennecke happened to sit in on a lecture about ionic liquids delivered by a speaker from Queens University of Belfast. The presentation, peppered with what seemed to be outrageous claims of the potential applications of ionic liquids as powerful solvents and electrically conducting fluids, was captivating.

“He was a real character,” she says. “Very flamboyant.”

Brennecke and a colleague from the University of Pittsburgh found the talk fascinating, but were unsure if the speaker’s assertions would hold up under scrutiny.

“Either this guy’s a real snake oil salesman, or maybe there’s something interesting here,” she recalls thinking at the time.

The two decided to test the speaker’s claims by making their own ionic liquid. They soon began a series of experiments to dissolve solid crystalline mothballs in the ionic liquid.

“It worked beautifully,” she says.

Their work, subsequently published in the journal Nature, was a breakthrough.

“We were the first people to do any separation or extraction with an ionic liquid.”

The result of those initial experiments led to years’ of additional research with ionic liquids, work that continues to this day in several forms, including post-combustion CO₂ capture.

“The route we took was to understand the solubility of different gasses in ionic liquids,” Brennecke says, noting she and other researchers at UT are experimenting with ionic liquids to separate CO₂from the flue gas emitted from power plants.

In addition to her teaching duties, Brennecke is Deputy Director of the new Center for Innovative and Strategic Transformation of Alkane Resources (CISTAR), a five-year, $20 million project funded by the National Science Foundation aimed at converting natural gas into transportation fuels.

The work, which she describes as “incredibly important”, focuses on developing innovative catalysts, separation processes and process systems that convert methane, ethane and propane found in shale formations into more valuable liquid fuels, including gasoline and diesel.

“There’s a high level of variability, but in general the shale formations have a higher percentage of gas liquids.”

The CISTAR approach also could decrease the amount of greenhouse gases and air pollutants, while reducing chilled and pressurized trucking of light hydrocarbons and simplifying transportation of fuels to end users.

After 28 years at Notre Dame, Brennecke was looking for a reason to come back home. When UT called, she was thrilled to accept the offer.

“I was very happy to have a reason to come back,” she says. “It’s a fantastic department; there’s so many amazing people, and every time you talk to a faculty member there’s new ideas and potential projects.”

The harsh winters of South Bend, IN had also taken their toll.

“I was happy to give my snow blower away,” she laughs.

Springtime is for the birds

When not teaching or conducting research, Brennecke spends her free time bird watching.

Many birds make a brief annual stopover in the Lone Star State on their way back north after wintering in Mexico or some other southern clime, she observes.

“That’s one of the great things about Texas,” she says gleefully.

This spring, Brennecke and her husband are keenly awaiting what they hope will be their first sighting of the Golden-cheeked Warbler, also known as the gold finch of Texas, an endangered species that nests only in Central Texas.

“They winter down in southern Mexico and Central America,” she says, adding that the golden-cheeked variety of warblers have a special fondness for the Austin area.

The birds like to make their nests out of the bark of juniper trees, home to worms and spiders of which the warblers are particularly fond.

“They’re picky little things,” Brennecke says with a sparkle in her eye.