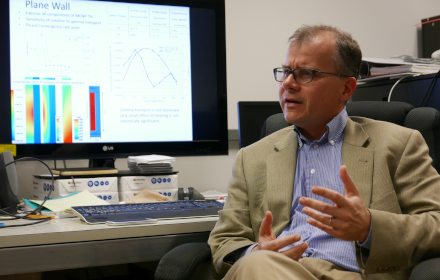 As Texas and other states across the country grapple with how to respond to federal rules calling for a dramatic reduction in CO₂ emissions from power plants, a UT Austin nuclear engineer is at the forefront of new research that one day could play a pivotal role in configuring a cleaner electric grid of the future.

If proven economically viable, commercial-scale thermal storage systems could furnish a vital and stable supply of zero-emission power to a changing electric grid.

Thermal storage produced from nuclear plants, Schneider believes, holds real promise for solving the vexing problem of how to effectively provide a stable, economical, and zero-emission source of energy to back up intermittent sources such as wind and solar.

“What we’re working toward is making a truly carbon-free electricity mix possible,” he says.

The multi-year research program, funded by the U.S. Department of Energy’s Office of Nuclear Energy, includes research partners from MIT and Areva, one of the world’s largest nuclear technology companies largely owned by the government of France.

The research has taken on added meaning amid growing concerns over the damaging effects of global climate change and the desire among policymakers and others to reduce the level of CO₂ emitted during electricity generation. Arguably the most controversial – and certainly the most far-reaching – carbon reduction initiative is a new U.S. Environmental Protection Agency rule requiring 30 percent cuts in CO₂ from the nation’s power plants from 2005 levels by 2030.

In some regions, including Texas, efforts to ‘decarbonize’ the electric grid have prompted enactment of market rules that demand grid operators accept all electricity from wind and solar whenever it is generated.

While the influx of wind and solar are displacing dirtier forms of electricity generation, such as coal, they are intermittent sources that cannot be relied upon to provide power when demand for electricity is the greatest. As a result, grid operators, such as the Electric Reliability Council of Texas, or ERCOT, must call upon other generating sources to back up renewable energy and meet demand.

Nuclear plants, which are designed to provide ‘baseload’ electricity generation and operate virtually 24/7, do not provide the flexibility grid operators need to meet electricity demand on short notice when the wind isn’t blowing or the sun isn’t shining.

“We need a source of power you can ramp up and down very easily and turn off when you have all the wind and solar you need,” Schneider says.

In Texas and many other areas, natural gas-fired power plants – which can be fired up and shut down relatively quickly – typically serve as the back-up to wind and solar.

At present, “the generation technology that synergizes with intermittent renewables is natural gas,” Schneider says, “and I view this as a serious challenge.”

‘Half is not all the way’

Retiring coal plants and replacing them with natural gas reduces emissions from electricity by half, he adds. “But half is not all the way. We’re still adding fossil fuels to the atmosphere.”

The answer, researchers believe, could be found in large-scale thermal storage produced from nuclear power. This approach has some compelling advantages over electrical energy stored in batteries, which Schneider does not expect to be economical in the near future.

“I think that thermal energy storage with nuclear, plus solar and wind providing their contributions, together can provide us the synergy that gives us a carbon-free landscape of the future,” Schneider notes.

Researchers are exploring two primary thermal storage technologies. The first involves the use of steam accumulators, in which steam produced during a nuclear power plant’s operation is stored in banks of large pipes that can later be dispatched during times of peak demand or for load leveling.

The research team is also studying the effectiveness of storing steam in underground reservoirs – either cavities or underground rock formations – in essence creating an artificial form of geothermal energy that can be tapped when needed.

“We want to give nuclear that ability to choose when it’s selling its product – to sell its product when it’s economical,” Schneider concludes. “And with no emissions.”

Schneider also is engaged in a research effort involving several DOE national labs and other universities that is focused on developing cost-effective breakthrough production technologies for extracting uranium from seawater.

Ensuring a long-term domestic supply of uranium is important to the DOE as it considers future prospects for wider use of nuclear power to help meet electricity demand, particularly as the desire to promote low- or zero-carbon sources of energy grows.

Seawater, Schneider explains, contains dissolved amounts of virtually every element in the periodic table – including uranium and other heavy metals. Vast quantities of uranium in the world’s oceans make it one of the most attractive potential sources, but previous research efforts have yet to produce an economically viable method of extracting it from seawater.

Researchers at UT Austin and the University of Alabama are exploring various types of substrate absorbents that allows for the extraction of uranium via chemical compounds attached to the polymer.

“Our end goal here, and I think we’re getting closer to it, is to show that this technology is feasible, and that it can be done at moderate cost and at large scale,” Schneider explains.

One of the most promising substrates – an alternative to plastics used in prior research efforts – features chitin fiber, a tough, semitransparent substance found in the exoskeletons of shrimp, crabs, lobsters, and many insects.

The use of chitin fiber potentially represents a transformational technology, Schneider says “because you’re not introducing anything foreign to the food chain or into the marine ecosystem.”

Extraction of uranium from seawater is one of several “hedging strategies” that could be employed should uranium prove to be a scarce resource in the future, Schneider notes.

Another strategy could involve building a new and expensive form of advanced nuclear reactors that have the potential make more fuel than they consume, and use uranium much more efficiently than it is today. So-called ‘breeder reactors’ require the reprocessing of nuclear waste, however, which gives rise to other issues, including how to manage plutonium produced from reprocessing.

“You’re putting that material in circulation,” Schneider notes, adding that he sees an even greater risk from increasing awareness of reprocessing technology, which raises the possibility that such knowledge could “fall into the wrong hands for nefarious purposes.”

The work involving seawater extraction of uranium is valuable, Schneider says, because it could obviate the need to pursue other technologies to ensure the sustainability of uranium as a resource.

Schneider, who grew up in Binghamton, New York, attended nearby Cornell University, where he earned his Bachelor’s degree in Mechanical Engineering, a Master’s degree in Nuclear Engineering, and a PhD in Theoretical and Applied Mechanics. He spent four years at the DOE’s Los Alamos National Laboratory, where he conducted research on nuclear weapons safety and advanced nuclear fuel cycles. He joined the faculty at UT Austin in 2006.

In addition to his research, Schneider teaches several classes, a rotation that includes an undergraduate course, Introduction to Nuclear Power Systems, typically taken by engineering, physics, and chemistry students “who are interested in learning about how nuclear reactors work and want to understand why Chernobyl happened, who Fukushima happened; what goes on under the hood.”

He also teaches a graduate-level class, “Computational Methods in Radiation Transport,” which examines how radiation moves through matter, as well as courses in the nuclear fuel cycle; nuclear reactor theory; a class exploring fluid mechanics and heat transfer; and core mechanical engineering courses.

In addition, Schneider oversees the research of 10 graduate students, some of whom are involved in the projects summarized above. One student is researching methods aimed at improving oil well logging; another is examining ways to make nuclear fuels more durable for the next generation of reactors; and another is working with scientists at Los Alamos National Lab on how to make materials used in nuclear reactors less attractive for the assembly nuclear weapons.

At the Nuclear Engineering Teaching Laboratory (NETL), Schneider works with about 40 students, many of whom undergo training on the university’s renowned 1.1 MW TRIGA Mark II nuclear research reactor, which is capable of both pulse and square-wave operations.

While the TRIGA Mark II reactor does not generate electricity for household or industrial consumption, it allows researchers to conduct a wide variety of experiments, including neutron depth profiling, prompt gamma activation analysis and neutron radiography. The NETL facility is one of the newest research reactors in the United States with a digital control panel.