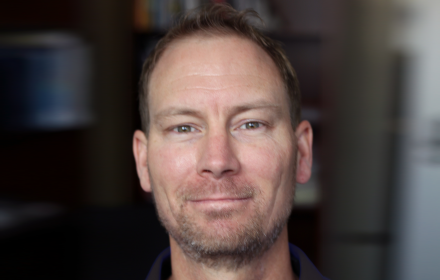 Summers are hot and slow in Temple, Texas, the small town up the road from Austin where Carey King grew up. To pass the time, he and his brothers built several skateboard ramps in their backyard, including one 16’ x 40’ half-pipe model, a big hit with other kids living in Central Texas before the time of public skateparks.

That same 13-year-old who designed plywood and two-by-four ramps for teenage boys went on to earn both a B.S. with high honors and Ph.D. in mechanical engineering from The University of Texas at Austin. Today, he is a research scientist and assistant director in the university’s Energy Institute.

Each fall semester King teaches a course, Energy Technology & Policy, in which he introduces undergraduate students to the laws of thermodynamics, energy systems and role of energy in our economy and society, and why people might look at the same data yet disagree on future energy goals. He also co-manages a weekly lecture series, the UT Energy Symposium, which features guest speakers from industry, academia, government and the non-profit world on a wide range of energy topics.

At the Energy Institute, King is involved in a variety of research projects. He also pursues his own work, which runs the gamut of energy generation, usage, and conservation, with particular foci on the energy-water-food nexus and macroeconomic modeling.

After completing his Ph.D. in 2004, King had a brief stint with a local startup, Unipixel Displays, where he modeled micro-electromechanical systems for flat-panel displays.

He then decided to come back to his alma mater, in 2007, to continue his research on energy systems. He landed a job at the Bureau of Economic Geology, a unit in the Jackson School of Geosciences, involving water usage in energy production. He later worked with the Center for International Energy and Environmental Policy, and joined the Energy Institute in 2013.

King helped lead a team of researchers from across the UT Austin campus in producing a study managed by the Institute, Full Cost of Electricity, which drew upon the expert analysis and varying perspectives of faculty from engineering, economics, law, and policy. Researchers took a holistic approach to examine the key factors affecting the total system cost of generating and delivering electricity, producing more than a dozen white papers.

The study identified and quantified direct and indirect costs associated with both traditional and emergent power generation and delivery systems, including fuel, environmental and public health effects, infrastructure investments, integration of distributed energy resources and storage, and the interplay of energy efficiency.

In addition to producing reports that provide a comprehensive assessment and analysis of various electric power system options, researchers created online calculators that allow policymakers and other stakeholders, including the public, to estimate the cost implications of potential policy actions.

“The papers and tools developed enable more complete dialogue and education among policymakers, industry, and consumers,” King says. “That will be even more critical as more of our energy system becomes electrified and as more options emerge for generating and managing electricity.”

During the public rollout of the study last December in Washington, D.C., King participated in a variety of briefings at government agencies and federal research organizations, explaining how the research can help policymakers make difficult decisions relating to energy production and usage.

“The overall goal of the project was to present information and data regarding various cost factors that go into both the historical and future aspects of the costs of providing electricity,” he notes.

Meanwhile, King continues to pursue his own research, which involves in-depth analysis how complex energy systems interact within the economy and environment. He spends much of his time tweaking macroeconomic models that examine the interaction between people, natural resources, and debt.

Over time, this work has evolved into King’s trademark work – the theoretical and quantitative comparison of methodological approaches toward economics, physical flows of materials and energy, and the life cycle of energy systems.

The research represents a sweet spot for King, the sort of analysis he relishes: how commonly accepted economic models – which he sees as inherently flawed – are driving a host of policymakers’ energy decisions, including the judgements and tradeoffs that affect everyone who uses energy.

For example, the economic models used to inform decision-makers about such policies as the Paris Agreement on climate change are fundamentally flawed, King wrote recently in an article for Earth magazine. The problem is not the specific economic assumptions relating to a “low-carbon” transition, he argues, but rather structural flaws and broad assumptions in the economic models themselves.

One of the driving forces behind his modeling is what he sees as a dramatic change in a longstanding pattern of declining energy and food costs.

“My research led me to conclude that the cost of food and energy are no longer decreasing, which is different than since the Industrial Revolution started,” King explains. “And that is a major driving factor in how things have panned out since 2000.”

He remains fascinated with the often competing, and bedeviling, policy and social systems that, while often overlooked, hold such importance for society.

“I don’t see anyone talking about that … so I figured I have to be the one that says, ‘this is how I know this is a relevant change in the pattern.’ ”

King points to a viable way out of the predicament, a view that ascribes to his core analysis.

What’s needed, he argues, is the creation of macroeconomic models “that can plausibly replicate historical trends of the most important energy and economic variables in times of high-energy investment, recession and growth,” that in turn will enable us to ask relevant questions about how low-carbon investments impact economic growth.

For those interested in a less technical explanation of King’s analysis, read his op-ed in Psychology Today.

Meanwhile, King is part of a team that has begun work on the Energy Institute’s next research project that aims to further the understanding of existing U.S. energy infrastructure. The multidisciplinary team, which again will be comprised of faculty members from schools and colleges across the UT campus, will model the technical requirements and financial opportunities related to a range of future infrastructures.

“Our goal with this study is to inform the public dialog and policy formulation about energy infrastructure with quantitative, rigorous, and dispassionate analysis that identifies and quantifies the costs, benefits, and financial opportunities of different options,” he notes.

King spent this summer at the Joint Institute for Strategic Energy Analysis (JISEA), a part of the National Renewable Energy Resources Lab, the only federal laboratory dedicated to the research, development, commercialization, and deployment of renewable energy and energy efficiency technologies.

While continuing his research at JIESA, King also began work on a new book – The Truthiness of Energy – that centers on “two stories, or narratives, that pervade discussions of our energy future, and thus our economic livelihood.”

In the first of two stories, King will describe the lavish lifestyle afforded the developed world through its exploitation of fossil fuels.  Proponents of this story assert “we must stay the course to ensure future prosperity and growth,” he says.

The second story offers a vastly different choice: we can and should replace our dependence on fossil fuels with renewable forms energy that can save the environment, mitigate climate change impacts.  Adherents of this story, King says, point to renewable energy as the way to ensure future prosperity and growth.

“Both stories have truth behind them, but the visions are overly simplistic and built upon the same inaccurate economic assumptions that prevent constructive discussion while fueling fiery debate.”

Between teaching and his research, King doesn’t have a lot of spare time. But when he does, he tries to steal away to the Gulf Coast for some fishing, one of his passions – along with skateboarding.

For more on King’s research, read his published scientific articles.