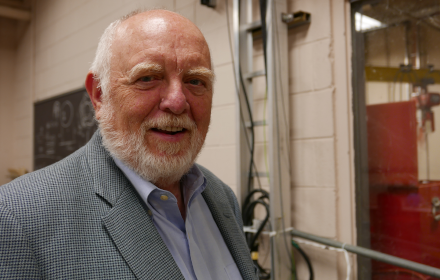 Bob Hebner thought he wanted to be a lawyer.

The Minneapolis, MN native, who moved to Texas when he was three, had enrolled at St. Mary’s University in San Antonio, intending to study law and become a criminal attorney.

But then something happened: he took a physics class. And that changed everything.

“It turned my life around,” he said recently from his office at UT Austin’s Pickle Research Center, a few miles north of the main campus.

“Law is pretty easy,” he recalled thinking. “This is a lot of fun.”

Fast forward 50-plus years, and Hebner is renowned for leading the largest and most comprehensive university-based electromechanics R&D facility in the U.S., UT Austin’s Center for Electromechanics (CEM).

Early on, Hebner had shown outstanding aptitude as a math whiz. In 1962, while a high school junior in Victoria, Texas, he was one of 30 highly promising math students from across the state to qualify for a special summer program at the university where he ultimately would work.

After obtaining his undergraduate degree in math from St. Mary’s, Hebner earned his Masters’ degree and PhD in physics from the University of Missouri, Rolla. He went on to do postdoctoral work at the National Institute of Standards and Technology (NIST), where eventually he was offered a job working with “3,000 of some of the smartest people I’ve ever dealt with,” including friends who went on to earn the Nobel Prize.

Hebner would stay at NIST for 27 years, bouncing between its headquarters in Washington, D.C. and its facility in Boulder, CO.

“That’s where I really grew up,” he said, noting that it was during his time at NIST that he began a lot of the work he continues today.

“My professional career really started at NIST,” he added.

The thrust of his research involves understanding how electromagnetic fields interact with matter.

While at NIST, Hebner conducted experiments in electro-optic and magneto-optic measurements and materials, and published in scholarly physics journals. Then, he was given the seemingly innocuous job of overseeing personnel tasked with calibrating watthour meters used throughout the U.S. to measure home electricity usage.

The assignment took his professional career in a new direction when Hebner was struck with an idea: why not go electronic?

“Basically, what I did was change the national standards from mechanical to electronic,” eliminating the need to calibrate the meters altogether.

The result was transformative.

“The whole system went away,” he said. “We saved millions of dollars; I got an award; and it was all because I sort of stumbled into it and said, ‘why don’t we do it better?’ ”

Hebner’s work with meters opened a door to what became a career-long partnership of working with electric utilities, regulatory agencies and others on measurements and economics related to the electric grid.

“It pulled me into the more practical side of life,” he recalled.

The conversion from mechanical to electronic electricity meters also paved the way for Hebner’s research into micro grids and smart grids after joining UT Austin in 1999.

He characterized the evolvement toward smart grids as an integration of “information technology, modern electronics, and modern telecommunication” that holds promise to “take the grid of the last century and make it work in the next century.”

“It’s like taking a Model A and adding cruise control and accident avoidance,” he said.

We need a smarter electric grid, Hebner added, because “we’ve got to make it better and faster for the future – we can’t just make it bigger and more expensive. It’s got to get better.”

At CEM, Hebner leads a team of researchers studying some of the key elements that make up a smart grid – energy storage, controls, and communications systems – “telling things what to do in a complex system.”

A major focus at CEM is how micro grids – self-contained power systems that can operate independently or connect to the larger grid – can be integrated with interconnected smart grids of the future, a development Hebner believes will be essential as the infrastructure continues to age.

“The vulnerability of the grid is scary,” he said.

Another major area of focus for Hebner’s group is electrification of transportation. Researchers at CEM are working on electric trucks, buses, trains – anything but passenger cars, work he said is performed for the most part in California and Michigan.

“Everything else can be done in Texas,” he noted. “Pick-up trucks are ours.”

The Center also is leading a federally funded research program through the Center for Transportation and the Environment to test hydrogen fuel-cell buses, in which researchers analyze data from buses in use in Austin, San Antonio and Tallahassee, FL.

At CEM, students are given the opportunity to work side-by-side with Hebner and other researchers, gaining invaluable hands-on experience on variety of projects. The Center does all it can to provide students with real-world experience that also creates a conduit for technology transfer for research sponsors.

“This is one of the few places where, if you’re an engineering student, for example, you can take an electric vehicle, and design something to make it better – and then build it, and test it, before you graduate.”

Hebner also preaches the necessity of articulating the essence of scientific research – why it’s important and what it can mean to society.

What students need to do, he said, is “learn to think, learn to speak, learn to write, and find something that they are excited about. If they can do that, they’re going to do well.”

As a college kid who long ago found physics to be “a lot of fun,” Bob Hebner is a living example of the wisdom of those words.