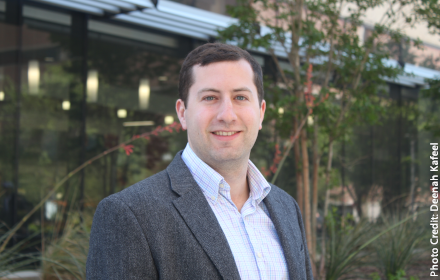 Ben Leibowicz has always been fascinated with the big-picture – interrelationships between seemingly disparate elements that form a mosaic revealing a framework for understanding how the world works.

He approaches these and other topics by developing interdisciplinary models that incorporate diverse methodologies, including optimization, economics, game theory, stochastic control, and general equilibrium.

“I like to think about feedbacks between sectors,” he explains.

Leibowicz’ research routinely features the development of sophisticated modeling programs used in analysis of complex energy problems. For example, researchers may separate the interplay of electricity generation and natural gas production, as well as how each affects the ways in which buildings use energy.

“All of these things are linked; they all affect each other,” he notes.

“I’m really interested in not only how the engineering interacts with the economics and with the policy, but also how different supply and demand sectors interact with each other.”
In addition to his primary research role within the ORIE program, Leibowicz holds a courtesy appointment in the Lyndon B. Johnson School of Public Affairs and supervises student research in the Energy and Earth Resources Graduate Program.

Leibowicz also teaches a graduate course in systems modeling, in which he instructs students on the art of constructing integrated models that combine concepts from engineering, economics, natural sciences, and policy.

The first step, he says, is to think about what is the right modeling paradigm that allows researchers to unify different sectors in a coherent, integrated framework.

That said, a key to his approach is remaining open to a variety of models.

“I try to teach my students to have a diverse tool kit,” he says with a laugh. “Like my advisor used to say, ‘If all you have is a hammer, then everything looks like a nail.’ ”

Leibowicz came to UT in the summer of 2016, and has found the university an excellent match for his interdisciplinary mindset toward research.

As a kid growing up on the north shore of Long Island, NY, he had a curious mind for a wide variety of topics.

“I was good at math and science, but I was interested in a lot of other things, too,” he says.

Leibowicz enjoyed a physics course as a freshman in high school, he recalls, where for the first time he moved beyond memorization of facts to “begin to understand how the world works.”

His public high school also offered a four-year Science Research program, in which he participated in a long-term science project that he eventually entered in national science competitions.

“The two teachers who ran the program were really dedicated,” he remembers. “It was awesome.”

The summer after his junior year, Leibowicz had the opportunity to conduct university-level research for an internship at SUNY Stony Brook, under the tutelage of an astrophysics professor.

“While I’ve totally forgotten all of the astrophysics content,” he chuckles, “I learned some valuable lessons from that program; I learned that I liked to do research, and I taught myself to code.”

Leibowicz attended Harvard University, where he graduated with a BA in Physics and a minor in Economics in 2011.

When it came time to decide where to attend graduate school, he considered a variety of disciplines, including applied physics and applied math, as well as business, systems engineering and management science.

He eventually settled on Stanford University’s Management Science and Engineering program – where he went on to earn his MS and PhD – because the multidisciplinary nature of the research featured there suited his desire to explore connections between varying fields of study.

“What I really liked about the department at Stanford was that it was very broad,” Leibowicz says.

“I didn’t want to become ‘an ultra-specialist’ who fit the stereotype of a PhD who “learned more and more about less and less.”

To broaden his experience, he also worked as a research fellow in the Energy and Transitions to New Technologies groups at the International Institute for Applied Systems Analysis.

Leibowicz came to UT nearly two years ago, after completing his PhD at Stanford.

During his interview and tour of campus, Leibowicz recalls being very impressed with the university’s engineering school, and felt the tight-knit sense of community within the ORIE program was a particularly good fit.

He also appreciated having access to campus-wide resources and collaboration opportunities at a large school “that is really high quality across the board.”

The sales job on Austin was sealed during a beautiful February afternoon lunch on the patio of the Hula Hut restaurant along Lake Austin.

While most of Leibowicz’ research at UT centers around energy and sustainability, the collegial atmosphere and camaraderie among faculty lends itself to expansive deliberation, he says.

“On any given day, I think about such different issues, and that’s what I love,” he says.

“I’m very interested in the stuff that, while it’s under the energy and sustainability umbrella, is quite different methodologically, or even in terms of the community of peers I interact with.”

Urban growth and the form of cities

Leibowicz recently has delved into the connections between cities and energy transitions and climate change.

Given what many cities see as slow or inadequate progress in combating climate change at the federal or international level, local officials are “talking big” about how to address the issue, he notes.

Rather than implementing far-reaching policies, such as a tax on carbon or Renewable Portfolio Standards, cities are initiating a broad range of non-traditional actions, including land use regulations, transportation planning, and building codes.

The advent of such initiatives at the municipal or community level is so new, Leibowicz adds, the scientific research community has yet to thoroughly comment or evaluate their effectiveness.

In response, he has taken an abstract approach to examining policies that he says “are so complex you need a relatively simple analytical model to get any insight on them.”

It’s unclear whether actions initiated by cities will be effective.

“It can make sense for cities to take certain actions, Leibowicz says, “but I think the key is that … there’s a real risk of unintended consequences or very high mitigation costs.”

In his research, Leibowicz aims to go beyond determining whether such policies are solely reducing emissions. His work examines the relationship between local initiatives and other sustainability benefits, such as improved air quality and access to green space.

While local initiatives may reduce greenhouse gas emissions and overall air pollution emissions, they may increase exposure (to pollutants) by causing people to live in a denser environment.

“There are certain policies that have synergistic effects … but there are other policies that are real tradeoffs,” Leibowicz observes.

A great number of factors, including the types of houses people live in, how far they live from where they work, how dense the city is and how high the buildings are – all contribute to energy demand.

The form of cities, “drives a lot of the demand” for energy, he adds.

For example, Texas’ settlement patterns – large, sprawling cities dominated by single-family dwellings that use a great deal of electricity to cool homes in a warm climate – have resulted in higher overall carbon emissions, Leibowicz notes.

“It’s really hard for us to transition from a car-dominated society to anything else, given the way cities are built,” he says.

In his class, Leibowicz asks students to conduct a “thought-experiment” in which he has them consider the rapid rate of growth of cities in China and India. He prods them to ponder the implications if all of those cities developed to look like Austin, versus if they all developed to look like Tokyo, which he describes as a dense, “ultra-energy efficient” urban environment that boasts an extensive public transportation network.

How developing countries decide to deal with the effects of climate change through the urban growth policies they enact will have “a great impact on global energy use and emissions,” he adds.

“I think this is incredibly important given the rate of urbanization around the world.”

“I’m increasingly fascinated with this area,” Leibowicz says, “because there are so many interesting connections and interactions between different goals or tradeoffs where policies might help you in one dimension and hurt you in another.”

Leibowicz sees an opportunity to expand on the work of geographers and urban planners who tend to focus at a micro-level, focusing on local issues such as air quality.

“There’s a lot of room for people with quantitative, interdisciplinary skill sets to come in and put a theoretical framework to all of this.”

It is this sort of exploration of the big picture – the creation of theories and accompanying models that pull together disparate but interconnected elements into a fabric of useful knowledge – that has become Leibowicz’ passion.

“The practical value of theory,” he says, “is that it should be applicable everywhere and in all contexts. The model’s structure should be portable.”

Leibowicz is integrally involved with the Energy Institute’s latest research project, the Energy Infrastructure of the Future, an interdisciplinary study aimed at developing an extensive understanding of existing domestic energy infrastructure, and exploring how infrastructure requirements influence the cost-effectiveness of alternative energy transition scenarios from the present through 2050.

Researchers are examining how various scenarios will reflect combinations of policy goals (e.g., greenhouse emissions reduction) and technology themes (a hydrogen-based economy or nuclear renaissance). Leibowicz’ role in the project is to model the technical requirements and financial opportunities associated with the extraction and processing of primary fuels, various types of power plants, and transmission and distribution networks.

One of the more novel contributions to the project will be an analysis of the interactions and synergies among several energy infrastructures, he says.

After developing an extensive inventory of existing domestic energy infrastructure, the project team will develop methods and tools to model future infrastructure requirements, while also considering the effect of trends that are driving change, including decarbonization, electrification, market designs for electric grids, modularity of energy generation, abundance of hydrocarbon products, and information technology and automation.

Project leaders believe the research – which will include development of interactive tools that will enable public and private stakeholders to understand the implications of various energy scenarios – will be of value to utilities, manufacturers, financial institutions, policymakers, and consumers.

When not fine-tuning a promising theoretical application to his latest model, Leibowicz takes every opportunity he can to travel, chronically his journeys with photographs. Unsurprisingly, he enjoys trivia and crossword puzzles. He also loves to hike, and is a big sports fan, especially football and soccer.